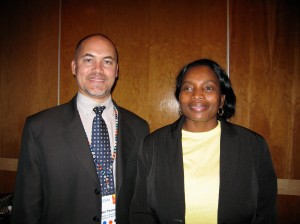 Elmo Thomas, on the left.

Efforts to set up a Namibian academy of natural and social sciences started in earnest this year.

Elmo Thomas, deputy director in the Namibian ministry responsible for science and technology policy development, told me that a steering committee is busy working on the structure of the academy. The steering committee includes academics, higher education officials and other stakeholders.

“Obviously one of our first priorities is to promote networking, within Namibia and the world at large,” said Thomas.

He said the process to establish the academy will go through three phases: the first being the ground work, the second being the establishment of the academy and the third getting it working on projects. He hopes that the first phase will be completed early next year.

For him, the ASADI meeting is a learning experience. “At this meeting we have academies at various stages of development, academies that are two and those that are five years old – it is an opportunity to learn.”

Namibia’s academy may be some time to come – a similar initiative in Ethiopia launched in April this year took almost two years to get off the ground from concept to execution.

This entry was posted on Tuesday, November 9th, 2010 at 9:42 am and is filed under Africa Science Academy conference (ASADI 2010). You can follow any responses to this entry through the RSS 2.0 feed. You can leave a response, or trackback from your own site.