If boulders could talk

“Where do you come from?” is a common question between delegates at conferences, and the 22nd Pacific Science Congress is no different. But it’s a not a question that you would usually associate with boulders. 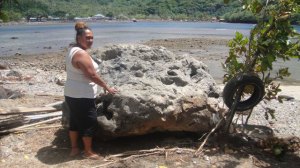 Where are you from? (Credit: US Geological Survey)

That’s why, as Adam Switzer, from the tectonics group at the Earth Observatory of Singapore, explained in a session this afternoon, researchers need to know where boulders washing up on coastlines or being hurled further inland have come from.

But researchers studying an event after the fact rarely know boulders’ original positions. Enter GeoBoulder, an online portal that aims to collate information about coastal boulders all over the world – and make it available for everyone.

The idea is that users will use a simple form to upload information about boulders in their area or that they have studied. This will help researchers study events in the immediate aftermath, as well building up a picture of how boulders move during tsunamis and storms that can be used to reconstruct past events.

But how does this help those living in coastal areas vulnerable to tsunamis and storms? Non-research applications haven’t been a priority, said Switzer but he can envisage uses for local authorities aiming to mitigate disasters.

For example, boulder movement can indicate how far waves might move inland.

“If you’ve got a seawall constructed from the same kind of boulders that were moved by a tsunami up the coast, you could use it to work out how far those boulders could travel in a similar event,” he said.

This entry was posted on Tuesday, June 14th, 2011 at 12:14 pm and is filed under Pacific Science Congress 2011. You can follow any responses to this entry through the RSS 2.0 feed. You can leave a response, or trackback from your own site.