How to make business environmentally ingenious

A plea against bureaucracy when designing ways of getting businesses to be greener was made by Colin Drummond, chief executive of a UK waste company, Viridor, one of the few industry representatives to address the plenary sessions.

He contrasted the environmental footprint of the UK’s water industry with that of its waste industry. 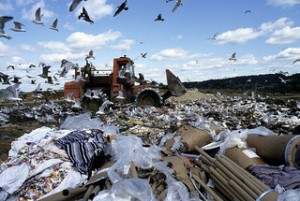 Tax on landfill in the UK has seen a 60 per cent reduction in carbon emissions.

“But we have achieved it at the cost of a huge increase in carbon dioxide emissions – and is the system robust enough to cope with future droughts?” he asked.

In contrast, with the waste industry there was “no bureaucratic approach” he said. There was just a tax on every tonne of waste that went to landfill.

Making landfill too expensive drove ingenuity, with the result that waste handling in the UK has seen a 60 per cent reduction in carbon emissions; a five fold increase in recycling; a six fold increase in renewable energy generation … and a profit for shareholders.

The argument that incentives work better than regulation was also put forward by Shell’s Martin Haigh, whose reception on Day One we covered here.

“If there was a global price on carbon that would transform the incentives for Shell,” he said

This blog post is part of our Planet Under Pressure 2012 coverage — which takes place 26–29 March 2012. To read news and analysis from the conference please visit our website.

This entry was posted on Thursday, March 29th, 2012 at 4:21 pm and is filed under Planet Under Pressure 2012. You can follow any responses to this entry through the RSS 2.0 feed. You can leave a response, or trackback from your own site.

One Response to How to make business environmentally ingenious