Can poor countries produce their own drugs?

Can lower and middle income countries (LMICs) engage in producing the drugs needed to combat neglected tropical diseases? And to what extent do their governments hold the key that will allow them to do so? 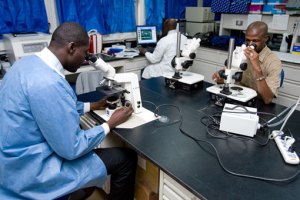 Where next? Drug production is the next step after research for low and medium countries (Source: ANDDI)

These questions led to a lively round-table discussion at Forum 2012 chaired by Elizabeth Ponder, associate director for scientific affairs at BVGH in the United States.

Ponder pointed out that neglected diseases affect more than 1 billion people around the world.

Millions of people in resource-poor countries die from these diseases, she said, because life-saving drugs, vaccines, and diagnostics are inaccessible, outdated, unsafe, ineffective – or not yet created.

The challenge was put to a panel representing a wide range of interested government bodies, NGOs, funders, and research laboratories, as well as the private biopharmaceutical sector .

Most panelists agreed that capacity was not the problem; many lower and middle income countries had the scientists and technologies needed to develop the relevant products.

The main problem lay in raising the funding needed to get the drugs into production, and to ensure that they were distributed to where they were required. And this frequently required a political – as well as a financial – commitment.

Jean-Pierre Paccaud, director of business development at Drugs for Neglected Diseases initiative in Switzerland, said that it was important to understand the specific needs of the areas in which diseases occurred, and then to focus on leveraging local capacities.

Konji Sebati, director of the department of traditional knowledge and global challenges at the World Intellectual Property Organization in Switzerland, said that lobbying governments was important since “without political will nothing will change”.

According to David Walwyn, chief commercialisation officer with the company iThemba Pharmaceuticals in South Africa, “it is important to articulate clearly to governments what we want, and to set clear targets.”  Universally-accepted goals were needed so that progress could be monitored.

And Alex Ochem, of the African Network for Drugs and Diagnostics Innovation, agreed that the research capacity exists in Africa. But he stressed the sobering truth that “no matter how much research we carry out and articles we publish, if we do not get the product – the medicines – to the market, then we have failed.”

This entry was posted on Wednesday, April 25th, 2012 at 5:21 pm and is filed under Forum 2012. You can follow any responses to this entry through the RSS 2.0 feed. You can leave a response, or trackback from your own site.

One Response to Can poor countries produce their own drugs?