For me, a refreshing change in climate change and sustainable development meetings, compared to the high-brow, purely scientific meetings, is that they bring in local communities’ representatives on the podium to share their insights and wisdom.

And so I enjoyed listening to Roberto Marin,  (Asociación de Capitanes y Autoridades Tradicionales Indigenas del Pira Parana (ACAIPI), Colombia; Jaqueline Dias, (Articulação Pacari) PCARI, Brazil; and  Myrna Cunningham, member, UN permanent forum on indigenous issues ad executive director of CADPI, Nicaragua, albeit I had to make do with an English translation of their speeches in Spanish or Portuguese. 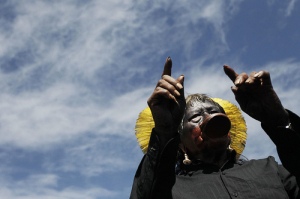 They narrated their struggles to preserve their culture and knowledge even as they assimilate some of the more ‘modern’ concepts of education and health; their efforts to forge inter-cultural universities for indigenous community students and with special courses on traditional knowledge; and their emergence from passive or helpless, marginalized victims of relentless modernization to determined negotiators in international treaties and conventions.

And Myrna Cunningham Kain was the first Miskitu woman to become a surgeon, and was the founder and first rector of the University of the Autonomous Regions of the Nicaraguan Caribbean Coast (URACCAN).

Jennifer Rubin, climate frontlines negotiator at UNESCO, explained how indigenous communities are determinedly making use of state and national dialogues; and UN mechanisms, to express their concerns ad protect their rights. Indigenous people live in or sue resources on some  22 per cent of the world’s land area, which harbours 80 per cent of the global biological diversity.

They made effective interventions in the Convention on Biological Diversity   (CBD), but feel they are yet to make a similar dent in climate change negotiations.  There has been some progress though. – recognition of indigenous knowledge at the the 2010 Cancun adaptation framework principles; and the upcoming fifth IPCC assessment report.

Indigenous people have not been passive. We are negotiating, resisting, adapting, and engaging with policymakers, nationally and internationally,  Rubis said.

This blog post is part of our Forum on Science, Technology and Innovation for Sustainable Development blog which takes place 11-15 June 2012. To read news and analysis from the conference please visit our website.

This entry was posted on Thursday, June 14th, 2012 at 4:06 pm and is filed under Forum on Science, Technology and Innovation for Sustainable Development 2012. You can follow any responses to this entry through the RSS 2.0 feed. You can leave a response, or trackback from your own site.

One Response to Indigenous communities emerge as proactive negotiators