If only sustainable development had moved as fast as ICT

Reminiscing about the quaint information communications technology (ICT) used at the last Earth Summit, Nitin Desai, former Under-Secretary-General for Economic and Social Affairs at Rio +20, was speculating yesterday what life would be like now if sustainable development had changed in as radical a way. 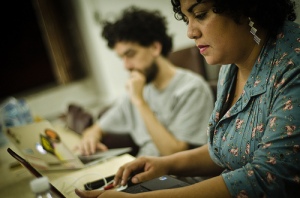 Desai described how in 1992, the World Wide Web was still an emerging technology, with the web browser Mosaic, credited with popularising the World Wide Web, only launching a year later. Although conference organisers “were quite ahead” and used the Internet two decades ago, it involved using a huge computer with servers occupying half the room. “If you caught connection speeds of 14.4 you were doing wonderfully,” he added, and document transfers would go on through the night.

By those standards, technological transformation has been extraordinary.

At the same venue today, and locations across Rio, 67,000 users can simultaneously access the wifi network set up by the Brazilian company Oi, the official sponsor and supplier of telecommunications services for the conference.

Oi have also installed 1800 broadband access points, 180 internet kiosks to access the conference, and the latest 4G mobile internet service is on demonstration at a side booth. The company also equipped organisers with cloud computing, smartphones and tablets – not that this would distinguish them from the tech-loaded conference attendants.

Paper is on the decline, with PaperSmart services printing only ‘essential’ documents, and only by request. More often than not, it’s easier just to browse through the five official websites dedicated to communicating the latest discussions.

This entry was posted on Tuesday, June 19th, 2012 at 11:31 am and is filed under Rio+20: United Nations Conference on Sustainable Development. You can follow any responses to this entry through the RSS 2.0 feed. You can leave a response, or trackback from your own site.