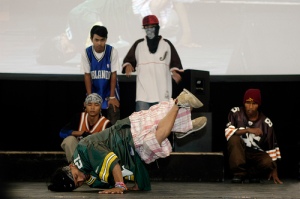 Performance of the group Kormix at the Global Village, a parallel meeting open to the general public Credit: International AIDS Society/Mondaphoto

“More than ever, at this conference we have faced reality and we have helped give visibility to vulnerable populations by naming these groups loud and clearly”, said Pedro Cahn, the conference co-chair, in his speech in the closing session and in his last day as president of the International AIDS Society.

Cahn called attention to the fact that “behind statistics, behind each number, behind each graph or curve, there are millions of people waiting for support, treatment and care”.

“We need more funds for AIDS; we need more integration with sexual and reproductive health, Tuberculosis and Sexually Transmitted Infectious services”, he said.

Julio Montaner, the incoming president of the International AIDS Society for 2008-2010 and director of the British Columbia Centre for Excellence in HIV/AIDS in Vancouver (Canada), also supported the universal access during the closing session:

“We must keep the pressure on the G8 leaders to follow up on their commitment to achieve universal access to prevention, care and treatment by 2010”.

Montaner affirmed that “there can be no end to the pandemic unless we secure full protection of human rights for those most vulnerable to HIV/AIDS. The rights of sex trade workers, injecting drug users, men who have sex with men, aboriginals, and women and girls must be protected through legal and policy reform in every country around the world. Unfortunately, we have a long way to go in this regard”.

Montaner said: “These carefully selected participants have made a commitment to return home to actively disseminate the newly acquired knowledge, as part of a concerted strategy to reach every corner of the world. Together, they represent the new generation that will pick up the fight against HIV.”

For more information on AIDS 2008 and to watch webcasts of several sessions, visit the AIDS 2008 website.

The next international International AIDS Conference will be in Vienna, Austria, in 2010.

[MEXICO CITY] Antiretroviral drugs can be used to prevent new HIV infections, according to research presented at the International AIDS Conference in Mexico City this week (5 August).

The research, from the British Columbia Centre for Excellence in HIV/AIDS (BC-CfE) in Canada, found a strong link between the use of highly active antiretroviral therapy (HAART) and prevention of new infections.

Read the full story on SciDev.Net

HIV and TB: visiting the (sad) reality of a South African township shack

A photographic exhibition shows the reality in a South African shack

Mixed feelings is what I felt when visiting the photographic exhibition prepared by 27 year old South African photographer Damien Schumann, during the AIDS 2008 conference.

He displayed an authentic South African township shack, presenting (beautiful and sad) pictures of people and families affected by tuberculosis (TB) and HIV, their stories and the lifestyle and living conditions that influence these diseases.

The exhibition initially focused on TB. “I was intrigued with the fact that TB is a disease that can be cured, but still the prevalence is high, so I wanted to hear the opinions, views and challenges from the point of view of those who are infected by it”, Schumann told me.

“Soon, I realised that a significant number of those that have TB are also HIV-positive, so the exhibition focuses on both diseases.”

The pictures were taken in South Africa and Zambia over six months. Schumann also asked the people to handwrite their views on the diseases in their mother language, which also form part of the exhibition.

“However, when the pictures were ready I realised that they didn’t express the real context, so I built the environment of a real shack for trapping the audience”, he said.

The shack was originally built for to coincide with the 2006 World TB day. The version displayed at the AIDS 2008 conference is supported by the WHO.

The Pan-Caribbean Partnership Against HIV/AIDS (PANCAP) will launch in October a US$7.73 million four year strategic plan to fight HIV/AIDS in the Caribbean, the second-most affected region in the world after sub-Saharan Africa.

The announcement was made during the AIDS 2008 conference by representatives of the Caribbean Community (Caricom) Secretariat. PANCAP is a Caricom special project.

According to Avert, an international HIV/AIDS charity based in the United Kingdom, there were an estimated 230,000 people living with HIV/AIDS in the Caribbean by the end of 2007. About 20,000 people were newly infected during 2007, and there were 14,000 deaths due to the disease.

The prevalence of HIV is 1.2 per cent, but in two countries – the Bahamas and Haiti – more than two per cent of the adult population is living with the virus.

The strategic plan against HIV/AIDS, to be carried out from 2008 to 2012, has six priority areas, including monitoring evaluation and research; prevention of transmission; capacity development for HIV/AIDS services; and treatment, care and support.

“We have been undertaking actions against HIV/AIDS, but we are not seeing impacts yet; we believe that giving emphasis to research [in the strategic plan] will guide us to reach better results and to promote a change in the region”, Edward Greene, assistant secretary general of the Caribbean Community Secretariat, told SciDev.Net.

“A problem Caribbean countries face is that they are classified as middle-income countries, thus they are not apt to receive external aid. In other words, they are too rich to receive help but too poor for afford themselves”, Peter Piot, executive director of UNAIDS – the UN Programme on AIDS – told journalists.

Shutting down clinical trial centres in Africa in response to continued failure of HIV vaccine candidates would be a big mistake, researchers warned at the International AIDS Conference in Mexico City yesterday (5 August).

They stressed the pivotal role played by Africa and African researchers in the search for a HIV vaccine.

Read the full story on SciDev.Net

The Lancet: special issue on HIV/AIDS

Here is an opportunity to keep updated on HIV/AIDS. The Lancet, the UK medical journal, launched a special issue on HIV prevention at the AIDS 2008 conference yesterday (5 August).

The issue features a series of six papers and two comments – all previously published online – approaching the theme of HIV prevention under different perspectives, including history, biomedical interventions and behavioural strategies to reduce HIV transmission.

It includes information and experiences from around the world.

The WHO has launched a package “designed to help low- and middle-income countries to move towards universal access to HIV/AIDS prevention, treatment, care and support”.

According to the WHO, it’s is intended to be a ‘living’ web-based publication, periodically updated with new recommendations based on the rapidly evolving experience of the health-sector response. However, it is not available in the website yet, only in CD-ROM format.

Increasing the coverage of HIV treatment from the current level of 50 per cent of those in need of medical care to 75 per cent could reduce the new HIV infections by at least 30 per cent, according to a study conducted in Canada and published last month by The Journal of Infectious Diseases.

The results were based on a mathematical model using a multiple source of infection framework to assess the potential effect of the expansion of highly active antiretroviral therapy (HAART) coverage among those in medical need on the number of individuals HIV-positive and on related costs in Canada over the next 25 years.

The model was calibrated using retrospective data describing the use of antiretroviral therapy and HIV-positive people in the province.

“It’s speculation, it’s a mathematical model and may be the figures can change a bit, but people who is needing treatment needs it now. We are missing the opportunity of saving lives and reducing the transmission”, says to SciDev.Net the Argentinean Julio Montaner, one of the authors of the paper and director of the British Columbia Centre for Excellence in HIV/AIDS, as well as elected president of the International Aids Society (IAS).

According to Montaner, even in Canada about 50 per cent of the HIV-positive people start the treatment late or never receive treatment.

In Africa, the implications of the study suggesting the widening of the coverage of HAART was welcomed by Elly Katabira, professor of the Makerere University in Uganda and the incoming president of IAS.

“Most of our patients we initiate on antiretroviral therapy are very sick and some have close to death”, said Katabira in a press conference.

“Sucessful treatment makes them excellent advocates for both treatment and prevention. They would not want themselves or anyone else to be where they have been”, he said.

An issue widely discussed in the AIDS 2008 conference is the fact that several countries deny the entry, stay or residence of HIV-positive people because of their HIV status.

According to the publication Entry denied, published by UNAIDS in partnership with other organisations and distributed at the conference, at least 67 countries are on the list of those that deny the entry to people living with HIV/AIDS.

“Stigma and discrimination around Aids remain as strong as ever: and in this context I join my voice with the UN Secretary General Ban Ki-Moon, and call on all the countries to drop restrictions on entry to people simply because they are living with HIV”, Peter Piot, executive director of UNAIDS, is quoted as saying in the publication.

A working group was created in February by UNAIDS and recommendations are expected by the end of the year for tackling the problem.

Last month (30 July), US President George Bush signed a law for the reauthorization of the president’s Emergency Plan for AIDS Relief (PEPFAR/Emergency Plan), which includes the promise for banning  prohibitions on HIV-positive people travelling to United States.

Latin America and the Caribbean has the highest proportion of people actually receiving of HIV/AIDS treatment actually receiving the treatment in comparison to any developing country, according to Luis-Soto Ramirez, co-chair of AIDS 2008 – the XVII International AIDS Conference.

“Sixty-two per cent of the people in need are on treatment in the region – the highest proportion of any developing country”, he said in his opening speech at the conference (3 August).

However, Pedro Cahn, co-president of the AIDS 2008, urged that Latin America and the Caribbean – in which two million people are HIV positive – should be not excluded from the international agenda because of its success in fighting the disease.

“Latin American and the Caribbean are also suffering of the consequences of the HIV/AIDS epidemic in the context of poverty and marginality”.

According to Ban Ki-Moon, secretary-general of the UN, in a speech, Latin America is “the source of some of the most dynamic responses to AIDS, but also home to the greatest challenges”.

This is the first time that the International AIDS Conference has been hosted in Latin America.