Rio+20: How to reduce your message to humanity by a third

If you had three minutes to address heads of state on your concern for humanity the last thing you probably want to hear is … that it’s been reduced to two.

ICSU president Yuan Tseh Lee’s three minutes (see previous post) has been chopped in just this way as, I understand, has the slot of each of the other eight Major Group leaders due to address the opening of the Rio+20 summit next week. 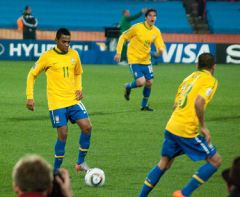 At the coffee machines during the Science Forum I asked him how he was going to reduce by a third his message to humanity.

“I was watching the football over the weekend,” he said “Argentina versus Brazil. I was listening to the commentator. He spoke so fast, he got so much across.”

So much energy! Yuan Tseh Lee is wondering if he could learn from that.

Not a bad idea. If he could inspire the Rio+20 negotiators to act like a football crowd rather than the nit-pickers they currently are, we might score some goals for humanity.

This blog post is part of our Forum on Science, Technology and Innovation for Sustainable Development coverage which takes place 11-15 June 2012. To read news and analysis from the conference please visit our website.

Forum on Science, Technology and Innovation for Sustainable Development begins ahead of Rio+20

Yuan Tseh Lee, Nobel prize-winner and president of the International Council for Science (ICSU) will have three minutes, at the opening of the Rio+20 summit on June 20, in which to convey to heads of state the multiple fears the science, technology and engineering communities have about the deteriorating state of the planet.

How luxurious, in comparison, is the full week, beginning today, in which the science, technology and engineering communities will be tossing ideas around on solutions to the same problems, from sustainable consumption to ecosystem services, and indigenous knowledge to water security.

The Forum on Science, Technology and Innovation for Sustainable Development (11-15 June) may be cumbersomely titled but it is, refreshingly and possibly uniquely here in Rio de Janeiro over the next few days, not purporting to shape the Rio+20 negotiations of the following week.

Instead, says Gisbert Glaser, senior advisor at ICSU,  it is trying to influence what happens afterwards – “the implementation of the outcome or, if it is not as ambitious as we would have liked, it’s a good opportunity to press again government people on the need to move away from just implementing business as usual on sustainable development”.

In other words they are trying to get at the key moment where, arguably, things went wrong after the first Earth Summit in 1992. Scientists had triumphed with the power of their message, persuading politicians to agree to act; an agenda was set and conventions were agreed – but this was followed by many failures of implementation leaving us in a situation 20 years later which is, on many counts, worse than before.

This forum is not about what the goals should be but about how to achieve them, says Glaser. Scientists have been ordered to avoid making science presentations and think instead of the “policy narrative” when they talk. Glaser is particularly excited that a quarter of the 600 delegates are from government delegations. It’s a good place to catch them, just before an international summit.

Very tough though, to get real movement out of such multidisciplinary gatherings. If we spot any fine examples of stakeholders bridging the linguistic and ideological barriers that separate them we’ll be blogging about it here; and tweeting about it from @scidevnet on the hashtag  #sciforum. ICSU will be tweeting, too, on @icsunews. And there’ll be news on our website soon.

This blog post is part of our Forum on Science, Technology and Innovation for Sustainable Development coverage which takes place 11-15 June 2012. To read news and analysis from the conference please visit our website.

I will be blogging from the World Science Forum in Budapest, Hungary, later this week (17­–19 November). It’s the fifth such forum and this year’s focus will be on the ‘changing landscape of science’.

The forum has a special link to SciDev.Net. It dates back to 1999, when the World Conference on Science was held in Budapest. SciDev.Net originated from a project set up by news staff at the journal Nature (with financial assistance from the Wellcome Trust, United Kingdom) to report on that conference. This was well received, leading to the creation of a permanent website devoted to reporting on, and analysing the role of, science and technology in development in 2001.

And voilà, here we are, ten years later, still going strong and witnessing a change in the global science landscape, with more international collaboration, and emerging new scientific powerhouses, such as Brazil, China and India.

The 5th staging of the forum, taking place this week, will look at the changes in science’s geography, with an emphasis on the emerging powerhouses and science in Africa and the Arabic states. It will also consider changes in scientific topics, and emerging issues, including nanotechnology, genetic engineering, food security, energy consumption, and emerging diseases. It hopes to put a special emphasis on bringing together scientists and politicians and encouraging the dialogue between the two communities.

The forum is organised by the Hungarian Academy of Sciences in co-operation with UNESCO (the UN Educational, Scientific and Cultural Organization), the International Council for Science (ICSU), and the American Association for the Advancement of Science (AAAS).

What went wrong at ICSU?

It’s been a while since we heard from the International Council of Science’s Regional Office for Africa (ICSU-ROA), but at the RISE conference I managed to catch up with its new acting director, Rocky Skeef.

The fate of ICSU-ROA has been unclear – at least to us journalists – since October last year, when news spread that an internal evaluation document had highlighted some problems at the organisation. Shortly after this the then director, Sospeter Muhongo, departed from his post and a new director is only expected to step in early next year.

The content of the internal report was for members’ eyes only, but after my chat with Dr Skeef this week I can shine some light on what went wrong.

First, there were money problems. ICSU is funded by hefty membership fees that few African countries feel that they can afford. So ICSU-ROA gets money from two main sources – the hosting country South Africa and ICSU’s main secretariat in Paris. This has raised questions over the ownership of ICSU-ROA’s agenda and whether it really represents the interests of the entire continent.

There had also been problems with raising funds to support the various projects that ICSU-ROA had drawn up plans for. (Projects that can be read about here)

But there also were serious problems between the Paris and Africa offices. “Personality clashes,” Skeef told me. Still, there is no doubt that ICSU-ROA will keep going, he said. The internal report found more “achievements” than “failures, tensions and problems”.

But a looming issue is what will happen when South Africa’s 10-year hosting deal for ICSU-ROA runs out. “Regionality” demands that the location of the African secretariat is rotated between members. ICSU-ROA is almost halfway through this first decade. Will another country axle South Africa’s mantle in five years’ time?