As a great add-on to the conference proper, we got the chance to see some Malian research in action today. I was pleased and surprised to see that thanks (largely) to various sources of international funding, the standard of equipment was high (similar in fact to the UK university labs that I worked in a few years ago).

First stop was the Malaria Research and Training Centre (MRTC), part of the Faculty of Medicine at the University of Bamako, where research into malaria, HIV, TB, leishmaniasis and filariasis is underway. High on a hill above Bamako, the flower-covered campus buildings hide air-conditioned labs where amongst others things, mosquitoes are bred and monitored for mating behaviour, resistance mutations to antimalarials in Plasmodium falciparum are tracked, and Mycobacterium tuberculosis is cultured and tested for multidrug resistance. TB culture is notoriously tricky, and from the pride on the researchers’ faces as they told us “it is now easy”, the possibility of the MRTC becoming the regional centre for MDR-TB testing doesn’t seem like a pipedream. 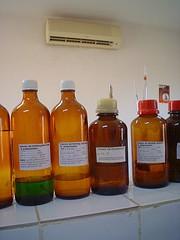 Next we were taken to the Traditional Medicine Department of the National Institute of Public Health Research, where traditional medicines are tested, processed and administered. Existing traditional medicines that healers use are first tested for toxicity, and if given the all clear are given to patients, who are then monitored for the alleviation of symptoms and any ill effects.

There are many issues to iron out when it comes to traditional medicine, from the validity of such drugs — and administering them almost blind to patients — to the morality of selling a placebo effect, but the attempts being made by the TMRC to apply the scientific method to traditional drugs and to start some kind of system to approve traditional medicine healers can only be applauded.

Last stop of the day, after a delicious lunch of beef skewers and rice, was a visit the Centre for Vaccine Development, where researchers are working on infectious diseases from E. coli to meningitis. But one of their main specialisations is leprosy, certainly not a trendy disease on the global health list. The centre was set up in 1934 to treat the disease and Mali still suffers a burden from leprosy so it’s especially encouraging that it remains a focus.

Around 20 of us went on the visits, a paltry number considering the number of Bamako 2008 attendees. It was a particular shame as I found that the discussions with researchers really crystallised the comments made at the conference; it was inspiring to see first hand how researchers are concentrating on the health problems specific to Mali, and producing results that feed into policy.

This week (17–19 November) ministers of health, science and technology will get together with health researchers, nongovernmental organisations, funding councils and donors to debate the priorities for global health research at the Global Ministerial Forum on Research for Health (or Bamako 2008) in Mali.

The meeting is a follow up to the Ministerial Summit on Health Research, held in Mexico City in 2004, which focused on overcoming the ever-evident gaps between research and policy, and policy and action.

SciDev.Net’s coverage at the time concentrated on the dearth of funding for health systems research, the disparity in funding for health research between developed and developing countries, and the need to recognise the burden of non-communicable diseases.

Somewhat depressingly, these issues remain at the top of the agenda today and will likely receive a great deal of attention at Bamako 2008, highlighting just how slowly things have moved on in the last four years.

Will the Bamako meeting be any different? Will the delegates have the opportunity to interact enough with the ministers? Will anything new come out of the ministerial discussions? And most importantly, will the final Bamako Call to Action be acted upon globally and in individual nations?

We’ll be there — the Air France pilots’ strike permitting — to give you the low-down on the sessions, the general mood at the conference, and whether it looks as though the words might just turn into action …