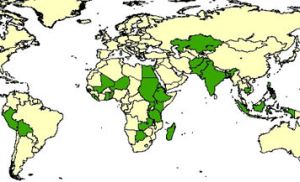 Conventional wisdom assumes a clear direct link between a bacterium or virus and the infection it causes. Then how does one explain why the same microbe may not cause much illness in a developed country, but could wreak havoc in a developing country?

The answer lies in deficiency of zinc, a crucial micronutrient (needed by the body in trace amounts). Zinc deficiency weakens immunity against infectious diseases, and could have important implications for not just poor response in developing countries to oral vaccines against polio and cholera; but also other infections such as malaria and tuberculosis, Maharaj Krishan Bhan, secretary of India’s department of biotechnology (DBT), told the TWAS meeting on Tuesday (19 Oct).

The link between zinc deficiency and weakened immunity came to light thanks to collaboration among nine developing countries that pooled their knowledge together for over a decade; and took part in WHO trials to provide sufficient study data to identify the crucial link between zinc and diarrhoea. Currently, diarrhoea kills over a million under-fives in Africa and Asia.

Thanks to the data from different country studies, scientists have now clearly established that zinc supplements can, not only treat diarrhea, but also help reduce pneumonia incidence, and deaths in babies with low birth weight.

Zinc supplements have now been adopted as part of national programmes to treat diarrhoea in several countries across Africa, Asia and Latin America.

That does not mean the problem has been solved. A study in Bangladesh showed that despite mass media campaigns, children still miss out on zinc treatment. And as Bhan observes, zinc deficiency in pregnant women will have implications for the foetus and the new born.