A much-talked about global research alliance for global sustainability, Future Earth, was officially launched, and its tentative research themes unveiled, at the science forum yesterday.

The vast initiative aims to integrate various sciences find solutions for sustainable development. Its ‘integrated research themes’ were revealed — to  mixed reception — at the forum.

The eight themes were in the fields of: state of the planet; resources for development and wellbeing; critical regions (eg cities, poles); disasters; living with the sea; lower carbon societies; global responses to the environment and transformative pathways towards a sustainable future.

The next steps include the research framework going online for open consultations in the next few weeks; four regional workshops to be held by the end of the year; and the scientific committee to be set up in early 2013.

“An enormously significant compilation of organisations has come together, which, I think, shows the commitment of the science community,” said Felix Dodd, executive director of Stakeholders Forum, who chaired the meeting.

And Joseph Alcamo, Chief Scientist, United Nations Environment Programme was effusive: he said this was “one of the most unique partnerships the Earth has seen” and said it had “tremendous potential” to provide us with the science needed to achieve sustainable development.

But despite praise and flagship status of Future Earth, there were many questions raised about it at the debate following the presentation, and also on the sidelines .

Kathleen Cass, executive director of the Committee on Data for Science and Technology (CODATA), said there were hardly any mentions of ‘data’ and it was not clear how or where the data expected to be produced by the research initiative will be stored and handled.

John Baglin, emeritus researcher at the IBM Almaden Research Center, United States, who earlier in the week proposed a research roadmap on behalf of the International Union of Materials Research Societies said the presentation omitted two key things: who is Future Earth’s audience and what are their deliverables.

Similar concerns about how this venture will measure its success were raised (and not answered) at a meeting earlier in the year.

This blog post is part of our Forum on Science, Technology and Innovation for Sustainable Development blog which takes place 11-15 June 2012. To read news and analysis from the conference please visit our website.

From R&D to innovation

Belgian economist Luc Soete (‘sweaty’ or ‘sweetie’ depending on whether your mother-tongue is French or English, he wryly informed us) discussed the idea of “innovation on the move”, and gave us a brief history of economic growth and its impacts on research and development. 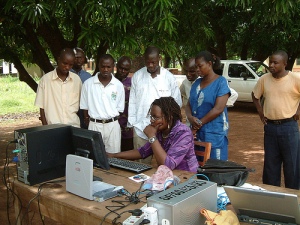 The social aspects of research are often more important than the technical. Credit: Flickr/IICD

We are seeing big changes in the 21st century, Soete said, with the combination of increasingly global aspirations and the new macroeconomics – where part of a nation’s economic growth is sacrificed in favour of stability – leading to a shift in economic growth from the South to the North.

“I like to think of it as [the] world upside down,” he said.

Taking place alongside this is a move from industrial research and development, typified by its high scientific content and its extent of professional specialisation, to innovation, which consists of undetermined outcomes, and trial and error research.

“Traditional industrial R&D is strongly cumulative, it’s replicable. It has agreed-on criteria and we are able to evaluate it,” said Soete. “Innovation is marked by flexibility, it’s hard to replicate, there are trial and error elements due to continually changing environmental conditions.”

Co-creation is also a new part of the game, he said, with users of technology playing an increasingly important role in the R&D process. There is a growing recognition and scope for mutual learning – “innovation by cooperation.”

This sharing of knowledge moves away from the merely technical aspects of research and also considers the economic, social and organisational aspects – which are often more important to innovation.

Soete warned that this knowledge exchange is hindered by the over-concentration of research expenditure in the North, where most research carried out rides on existing infrastructure. “So far we have been focusing on easy research,” he said, but there are new research challenges to tackle.

He called for multidisciplinary research programmes on appropriate innovation – rather than appropriate technology – that focus on solutions that are unwired to high-quality infrastructure and, thus, tailored to resource-poor settings.

This blog post is part of our 2012 Tech4Dev International Conference coverage.

On the benefits of science shops

Science shops have been around since the 1970s, when they were first introduced in the Netherlands. But at a lunchtime session led by two passionate advocates from France and Germany, they came across as a fresh, novel concept – so much so that a slide detailing their long history almost took me by surprise.

They have no dominant organisational structure – how they work depends entirely on context. They are usually established as part of a university or faculty, but some are independently run.

Participatory research forces researchers and practitioners to reconsider the notion of scientific excellence, she said.

Her words mirrored the sentiments of this morning’s panel on appropriate technologies. But despite its potential to contribute to a more just society, such research remains marginal and marginalised, says Neubauer.

“We must shatter the myth that only highly complex and cost-intensive technologies can create employment, well-being and sustainability. And we must ensure that [the] concept of innovation includes locally adapted and social forms of innovation.”

“The research and innovation that is prioritised and funded today will have a decisive impact on the future of our societies and our planet. It depends largely on underlying principles and values, how it is governed, and by whom.”

It seems to me that science shops would find an ideal home in the developing world.

Korea and Malaysia started science shops in the 1990s, but these failed to take off. China jumped on board in 2006, followed by South Africa the following years, and both countries have experienced success. But science shops have yet to make further impact in the developing world.

I asked Norbert Steinhaus of Living Knowledge if he had any thoughts on why this may be the case.

He said that he was unsure, and that it was difficult enough spreading the idea throughout Europe and the United States, let alone the developing world. He said that he plans on getting in touch with Tech4Dev delegates presenting research at the conference when he goes back to Germany.

“I’ve been going through the programme and noting down their contact details. I am hopeful that, if they are interested, we could look into setting something up in their home countries.”

This blog post is part of our 2012 Tech4Dev International Conference coverage.