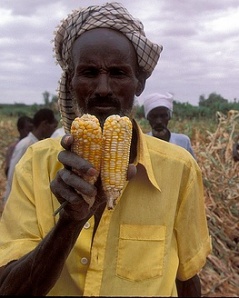 There’s a mantra among fundraisers that ‘seeing is believing’—show people how their money will make a difference and they’ll be more likely to part with it.

Certainly many donors supporting science for development are increasingly asking the recipients of their grants for case studies to demonstrate their impact.

The world of agricultural research is no exception, as we heard at GCARD yesterday, when several donors called on CGIAR to ‘fast-track’ some of their proposed mega-programmes, partly to build case studies that illustrate their worth.

Today, Kathy Sierra, chair of the CGIAR fund council, told SciDev.Net “it will build confidence if we have a few programmes ready to go and approved to demonstrate to world that this is what change looks like”.

At a press briefing this morning, the head of the International Institute for Tropical Agriculture, Hartmann, illustrated just how powerful a success story can be.

His organisation has been working with Nigerian leaders to improve agriculture. “Within four years, we had boosted the country’s staple crop by 10 million tonnes—with no price drops and the added environmental benefit of taking 800,000 hectares out of production”, said Hartmann.

After that success, policies within Nigeria changed. “People who had never before thought about investing in agriculture starting coming to us and saying ‘what can we do?’ ” ‘You can invest in agribusiness,’ was Hartmann’s reply. And they have.

“In just four years mindsets were changed,” says Hartmann. There’s a lesson in here—not only for the CGIAR as they thrash out the details of their mega-programmes, but for all of us concerned with bringing more funding to bear on science for development.

This entry was posted on Monday, March 29th, 2010 at 10:19 pm and is filed under GCARD 2010: Agricultural research for development. You can follow any responses to this entry through the RSS 2.0 feed. You can leave a response, or trackback from your own site.