The cost of losing, and restoring lost wetlands, will be huge

Quietly lamented in some of the side-events here is that compared to the glamorous cousin, the tropical rainforests, the ‘poor cousins’ – other forests and ecosystems – are not receiving enough attention.  The latter are presumed to have little, or at best, some boring biodiversity.

So I turned today to one such neglected region – the wetlands – at a side-event today. COP-11 is discussing  a draft report by  the Economics of Ecosystems and Biodiversity (TEEB), a global initiative on the economic value of conserving biodiversity,  n wetlands, which is expected to be finalised in early 2013 after inputs from COP-11. 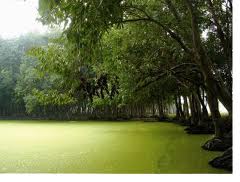 Wetlands, such as Sundarbans mangrove in India (above), offer water and food security, but are getting degraded. Credit: Ministry of Environment and Forests.

Wetlands come in different forms  — coral reefs, coastal wetlands, mangroves, freshwater lakes, tidal marshes, peatlands, coral reefs,  sea grassbeds, to name some.  Examples include the Pantanal wetlands of Bolivia, Brazil and Paraguay; Okavanga delta in Botswana; the Sundarbans in Bangladesh and India; the Ngiri-Tumba-Maindombe in the two Congos,  and Lake Tchad across Niger, Nigeria and Tchad.

Wetlands also provide a range of services that benefit people, particularly water-related services, including recharging groundwater, and fresh water supply. They offer are food security – mangroves, for example, serve as fish nurseries for their inhabitants.

Sadly, governments are “hugely not recognising, or under-estimating the value of wetlands,” says Nick Davidson, deputy secretary general at the Ramasar Convention on wetlands.

The world is losing its wetlands  fast due to agriculture production, urbanisation; and industrialisation. Since 1980, one-fifth (3.6 square kms) of the mangroves are lost.

“The risks and costs of inaction are huge, and the cost of (wetland) restoration big,” he says.

Meanwhile, there is disappointment over draft resolution on wetlands at the ongoing COP-11. “It is weak and timorous,” said one delegate.

This blog post is part of our coverage on COP 11 Convention on Biological Diversity — which takes place 8–19 October 2012.

This entry was posted on Friday, October 12th, 2012 at 10:39 am and is filed under COP 11 Convention on Biological Diversity, COP-MOP 6 Cartagena Protocol on Biosafety. You can follow any responses to this entry through the RSS 2.0 feed. You can leave a response, or trackback from your own site.